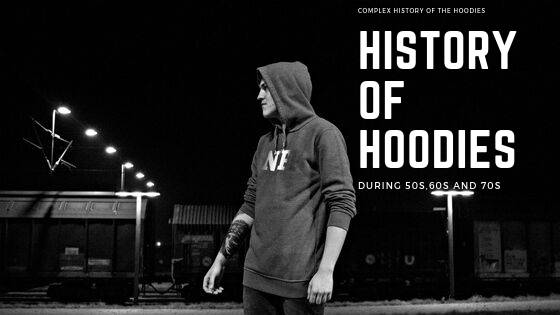 Hoodies are the most iconic wardrobe essentials that you see from Paris Runways to the sports field. This dress is in fashion from ages, and it has hardly changed its design. As a matter of fact, every coming generation has adopted this fashion as an emblem of sub-cultural affiliation. From streetwear to party wear, this dress has been a part of every occasion. Hoodies are also considered as a symbol of art, rebellion, and music, and there are so many stories that are related to this dress code. Even there were times when this dress was banned in public places due to some strange reasons.

How the trend of hoodies took its place in society:

When we talk about the history of hoodies, we come to know that it dates back to ’30s, Rochester, New York. There were two brothers William and Abraham Feinbloom, who were used to work in a manufacturing mill. In this mill, sports garments or apparels were prepared for the colleges all across the US. This Champion Company was initially wanted to produce a cloak or apparel that would keep the sportsmen warm during training. After the success of this dress, the spokesperson of Champion Company explained that initially, it got fame as a sideline sweatshirt. This was so because the athletes who were used to sit at the side bench of the field, they were used to wear this apparel.

One day, an idea came into the mind of Feinblooms. They revised the design of this apparel by introducing waistbands and elastic cuffs. The idea behind this creation was to trap the body heat, and as a next step, the hood was introduced to keep the athletes totally warm. And this apparel was called hoodie as it is commonly known in this modern world today.

It was the era of the ’50s, and 60’s when this dress was quite popular among college students. It was used as sportswear, but it became personal wear when players started to gift these hoodies to their girlfriends for wearing. Although primarily it was ideal sportswear, due to its popularity and functionality, people of the US military academy and employees of cold storages started to use this product too. These Champion hoodies got so much fame, and at the end of 60’s era, people involved in the construction field also started to use this garment for the cold winters of New York.

Hoodies during the 70s:

It was mid 70’s when hip hop culture started to appear in the streets of New York City. It was getting the fame of the common street style and dancers were also used to wear it to keep them warm before hitting the dance floor. Then there were the graffiti artists who were involved in criminal activities. They were used to wear hoodies, and they were interested in hiding their identity. Once graffiti writer Zephyr explained that they were used to wear hoodies for many reasons like their durability, washability, and inexpensiveness.

Hoodies trend at its boom:

The hoodies saw its peak in the early 2000s as pariah item. It occupied very little space, and as it has great practicality, many famous fashion designers like Vetements and Gosha Rubchinskiy have transformed this very piece of clothing in contemporary times. Many believe that this style has huge longevity and will keep on making its place in people’s wardrobe.

Hoodies also have been used as an item for showing racism and discrimination, especially against the black community. If you remember the killing of a 17-years-old student Martin who was unarmed and wearing a hoodie was shot dead by a policeman named George Zimmerman in 2012, sparked outrage as the policeman described that Martin looked suspicious as he was wearing a hoodie when he made a call to the department before killing the boy. Following Martin’s death, many protests were held in America, and the protestors wore hoodies as a sign of unity. They wanted to show their solidarity with the black unarmed student victim by wearing this very piece of cloth.